A common question at the cellar door is “why are the different wine varieties packaged in bottles of different shapes and colour”? The short answer to this is “tradition”. But what exactly does that mean? And why bother – surely it is more practical and cheaper to use a single bottle shape and colour for all the styles of wines we produce? As you may have guessed, there are many factors that have an influence on the style of wine containers – quite a long list in fact.

The history of the wine bottle dates back to 6,000 BC with large earthenware vessels called kvevri coated in beeswax used for storing and ageing ancient Georgian wine. The amphorae were next. These were ceramic containers with two handles and long thin necks sealed with clay stoppers invented by the Egyptians. Later used extensively in the time of the Greek and Roman empires, the amphorae were sealed using cork. Read more here.

Wooden barrels were later introduced for transporting wine overland before, in the fullness of time advances in technology led to the use of glass containers. The strength of the glass was improved in the 17th Century in Britain by Sir Kenelm Digby (“the father of the modern bottle”) and it was only then that the bottle strength was sufficient to hold champagne under pressure.

So why do we find wine bottles of so many different shapes? The technology available within different wine growing areas dictated the shapes of the bottles manufactured. In Bordeaux the bottles were straight sided with pronounced shoulders, in Burgundy they were wider based and tapered gently with sloping shoulders and in the Rhine/Mosel areas of Germany they were taller and narrower. Thus the regional varieties became associated with the bottle shapes. In addition there were differences in colour – in Bordeaux red wines were typically bottled in dark green glass, white wines in light green or clear glass and rose in clear glass to show off the attractiveness of the wine. In Burgundy both reds (typically pinot noir) and whites (typically chardonnay) were bottled in dark green glass. The glass used in the Mosel region was light green and amber in the Rhine region. As the Rhine and Mosel produced mainly aromatic varieties, often with a distinct sweetness, the taller bottle shape was taken to signify this style of wine.

Have you ever noticed the indentation or “dimple” known as the punt under the base of a wine bottle? In the case of champagne (or sparkling wine in general) it can be very pronounced. This is understood to be a practical design feature.  When the glass is blown it is very difficult to create a completely flat base so a rim is created instead, leaving the indentation.  The bigger the dimple the more stable the bottle is on the rim.

The champagne bottle (generally olive green in colour) needs to withstand the pressure of the carbonated sparkling wine and the bottle’s design with thick glass, gently sloping shoulders and a deep punt as well as a larger and reversed tapered cork is based on technical necessities rather than style.

Another common variation is bottle size. Of course most wine is marketed in volumes of 750 ml. This volume is consistent whatever the shape of the bottle. The bottle looks a lot bigger when the punt is pronounced but there is no difference in the volume of the wine it contains.

A clear pictorial summary of wine bottle shapes and sizes is given here on the Wine Folly blog and illustrated below. 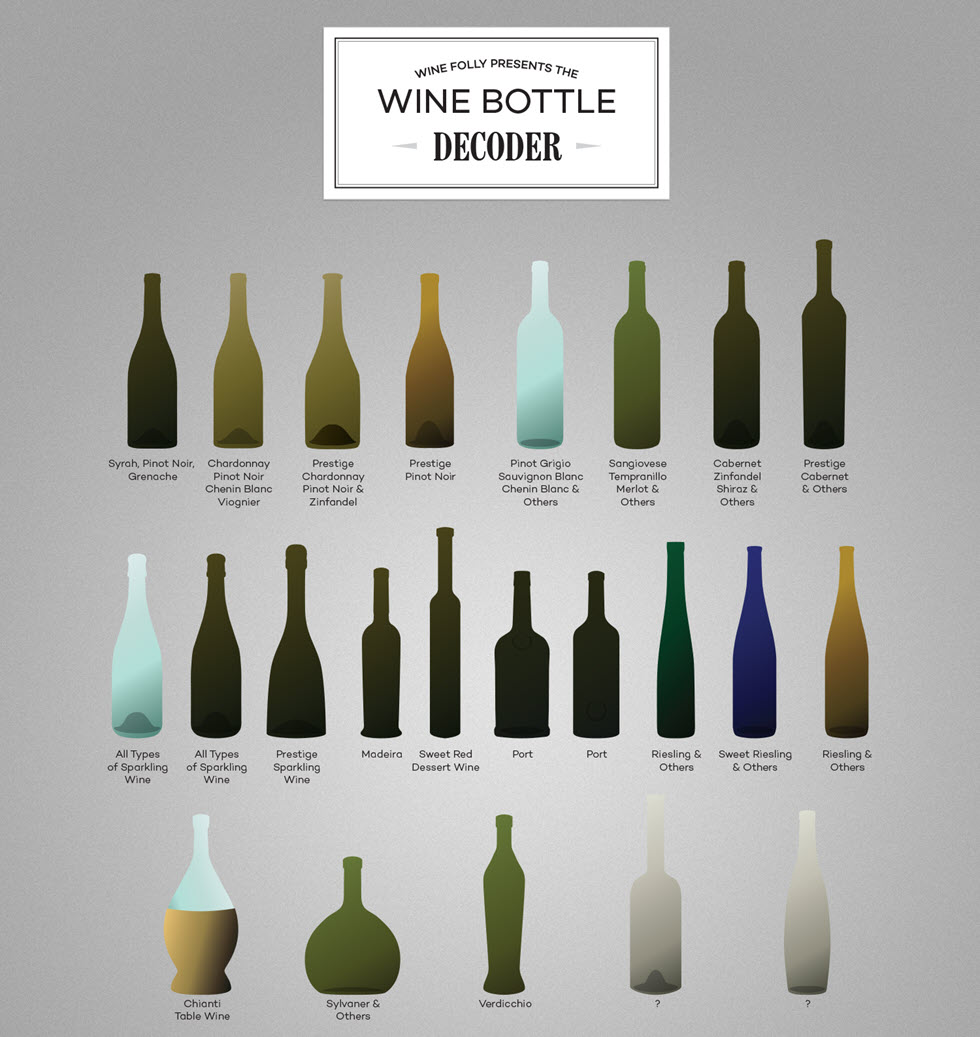 The standard bottle size is called “Standard” and the “Magnum” is two bottles or 1.5 L. The smallest bottle is called a “Split” (187.5 mL) and the largest is the massive “Melchizedek or Midas” (30L). Many of the large format wine bottle sizes are named for Biblical kings and historical or mythical figures (Melchizedek—Biblical, King of Salem; Midas may refer to the mythical king of Phrygia in Greek mythology). For more information see these articles here and here.

Closures in the ‘old world’ are traditionally made from cork but, since the 1970’s, in the case of Australia and New Zealand, bottles are now mainly sealed using a screw cap called a stelvin. A good quality cork is virtually airtight but it is generally said that it allows a very slow ingress of oxygen which enhances the ageing of the wine. And, if it isn’t kept moist, the cork can dry out, loosen and ruin the wine in the bottle.

A “corked wine” can be rendered faulty by a fungus - TCA (short for 2, 4, 6 Trichloroanisole) which occurs naturally in the bark of the cork tree and spoils the wine (cork taint) the instant the cork is in place with distasteful aromas of wet dog, mould or old wet newspapers.  Read more in this article. Screw caps or “Stelvin caps” are closures made from aluminium material which threads onto the bottleneck. Screw caps prevent the wine faults of oxidation and of cork taint, and are easier to open. Screw caps have a much lower failure rate than cork, and in theory will allow a wine to reach the customer in perfect condition, with a minimum of bottle variation. Cork, of course, has a centuries-old tradition behind it, and there are also concerns about the impact of screw caps on the ageing of those few wines that require decades to be at their best. Some argue that the slow ingress of oxygen plays a vital role in ageing a wine, while others argue that this amount is almost zero in a sound cork and that any admitted oxygen is harmful.

How does any of this influence our enjoyment of the wine?

So do any of these many features of shape, size, colour or closure make the wine taste better? Well obviously a bad cork is a no-no. But what about bottle size and shape? It is likely that the wine will age quicker in a smaller bottle due to the ratio of oxygen to wine in the bottle. So go for the large format bottles if you want to keep the wine for longer before consuming it.  But be careful to store it well…a large format bottle is difficult to cellar and if it is under cork you would be well advised to lay it flat, which in itself could be a challenge! The shape is more of historical and traditional interest and will have no impact on the wine itself. The colour is important if you wish to age the wine as it is likely to oxidise more quickly in clear glass than in darker glass.

It is difficult to match the “romance” of elegantly cutting the seal and removing a cork successfully using the ‘waiters’s friend’ and decanting or pouring the wine for your friends who wait in anticipation for the moment they can swirl, sniff and sip the precious contents of an aged wine from your cellar. Anyone who has had to sieve out a crumbled cork or throw out a corked wine will know that moment of disappointment and regret that is avoidable by choosing the more practical screw cap instead.
Probably an unexpected factor to consider is that of fashion and acceptance of packaging style. All fashions are based on visual image, recognition, interest and enticement. Brand image and product presentation promote prestige and luxury perceptions.  So the better quality heavier glass, appropriately shaped bottles underlining the customer’s expectation and deeper punts giving rise to bottles that appear more majestic promote the classical and/or premium wines whereas it is entirely probable that unusual or unexpected bottle shapes and colours could be visually more enticing in marketing more unusual wine varieties or styles, with wine labels and additional packaging making a statement to match. 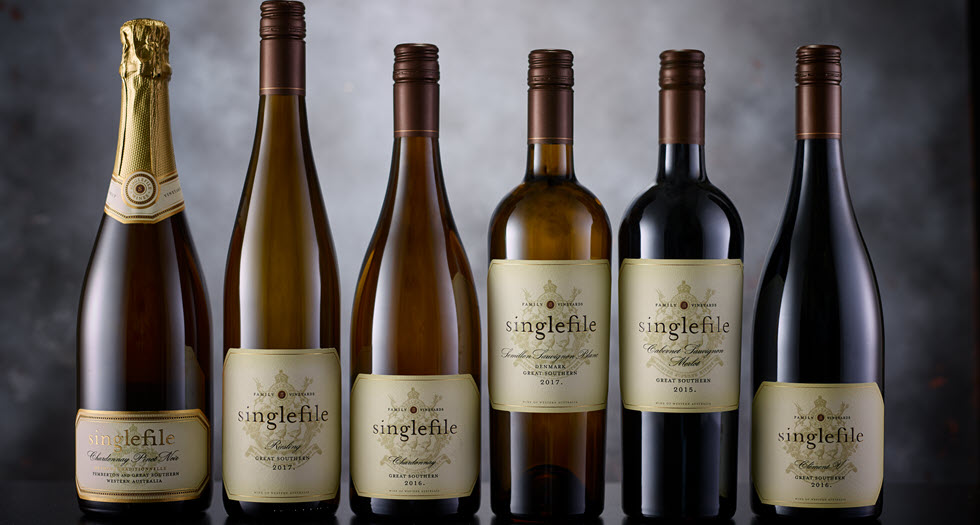