Followers of Singlefile will know that our dedication to making exceptional wines is deeply aligned with our commitment to Western Australia’s Great Southern region. You say Singlefile; we say Great Southern. But throughout its history, this region has not been held in the high regard with which it is now recognised. Despite being touted as Australia’s largest region, for a long time its very size and isolation were the monkeys on its back. It took a series of viticultural assessments and serious determination and faith from a number of producers to pull this region into the upper strata of winemaking regions.

Within the confines of this agriculturally rich rectangle (150km from north to south; 100km from east to west) lies a liquorice all-sorts of land girt by sea. Its geography is a patchwork of coastal maritime land, gently undulating hills, open grazing country, eucalypt forests and granite outcrops. It’s as large as it is diverse. Turns out this variability is what makes the Great Southern so convincing as a supreme winemaking region.

But first, a quick history lesson. Did you know that Albany used to be the capital of WA? The NSW government moved military presence there to protect it from French colonisation attempts (how different may have the Great Southern area been as a wine-growing region if the French took hold?). When the capital moved to Perth in the mid-19th century, the south-east corner of WA dropped off the map, with little investment in infrastructure.

Over the early 1900s, the primary business was timber milling, which created the bustling town of Denmark (named after a high profile UK army person; not “Our Mary’s” European home). That timber made its way throughout the world supporting the global growth in rail. After all the timber was milled Denmark’s population reduced dramatically and it became somewhat of a ghost town. The WA Government was looking to find sustainable industries and to encourage migrants to settle in this area to make something of the land. Their attempts were unsuccessful – families arrived to their “dream farm” densely populated with tree stumps left from the timber milling days and no tools to clear the land. The Great Southern continued to be an ongoing issue for the government, who searched for economically sustainable pursuits to support the region.

In the background, the Great Southern’s winemaking foundations were being laid. In 1859, settler George Egerton-Warburton planted vines on his property in Mount Barker, one of the Great Southern’s five sub-regions, and bottled his first vintage two years later. But not much transpired of the vinous nature until the mid-1900s, when the first real commercial foundations were laid by horticulturalist Bill Jamieson. His extensive knowledge of the area’s soils and  climate was augmented by the research of Californian Professor of Viticulture Harold Olmo during a government-sponsored trip to Western Australia. Olmo
spent eight months researching the area’s potential success as a winemaking region. In his 1956 report, the Great Southern regions was highlighted as showing great promise for making wines in the traditional light European style.

Olmo’s findings were backed by agricultural and viticultural scientist Dr John  Gladstones in 1963 and endorsed by the Western Australian Grape industry Committee. The State Government identified the Springvale site in Mount Barker, owned by the Pearse family (now known as Forest Hill), to establish an experimental vineyard and signed a 10-year lease for the property. Bill Jamieson and Dorham Mann went to Mount Barker and the first experimental cuttings were planted in 1965 and first vintage was 1972. In 1975, this vineyard’s Riesling won nine trophies at state wine shows and suddenly the Great Southern region was on the map. 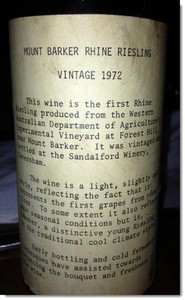 Along with the raised profile came the travelling salesmen offering to plant vineyards throughout the region. Unlike other regions where meticulous research was done beforehand, most Great Southern vineyards went into farmland that was being used for grazing (Singlefile’s property once housed a piggery) and, on the back of the success of the Riesling, many farmers were happy to give this new enterprise a go. From the mid-70s to the mid-90s, many vineyards were established with a fruit salad of varieties spread throughout the region.

Some 30 odd years later, the Great Southern region is undergoing a correction of sorts where vintners are able to observe the established vineyards to discern which varieties and clones are best suited to which sites and sub-regions.

When we established Singlefile in 2007, buying a vineyard established in the late 1980’s, we inadvertently found ourselves in the middle of this correction. And we performed our own operation (we removed the Merlot and Shiraz and planted Pinot Noir). The Great Southern’s diverse conditions – some Mediterranean; others maritime with different altitudes and micro climates – have resulted in the region becoming one of the few in Australia to produce world-class wines of the classic varieties: Riesling, Pinot Noir, Cabernet, Shiraz and Chardonnay. We had come to understand the importance of terroir.

From 2008 to 2011, with the help of Larry Cherubino, Singlefile assessed many vineyards, benchmarked many wines, and started to form relationships with like-minded people to gain access to great vineyards. Our aim? To ensure each of our wines was a wine of place, showing the true potential of the Great Southern. Of course, Howard Park, Larry Cherubino and many other producers have been doing this for years. Our discoveries simply became part of a more significant trend of the Great Southern region maturing to grow the varieties that are well suited to the terroir. 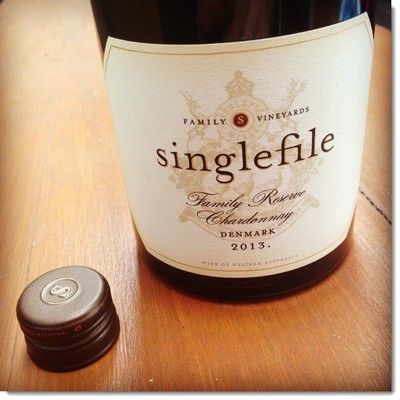 Wine producers can now see the benefit of cherry picking the right sites from the vast array of regional diversity in the Great Southern to make outstanding wines with elegance and pristine flavour, bringing varieties to life in their happiest sub-regional locations. Although this regional hotspot has already done much to prove its place on the podium, I believe the best is yet to come, especially within each of the five sub-regions. So what are the distinctions between these five sub-regions in the Great Southern? My next article will feature the full catalogue of these areas and their key vitals. Stay tuned.