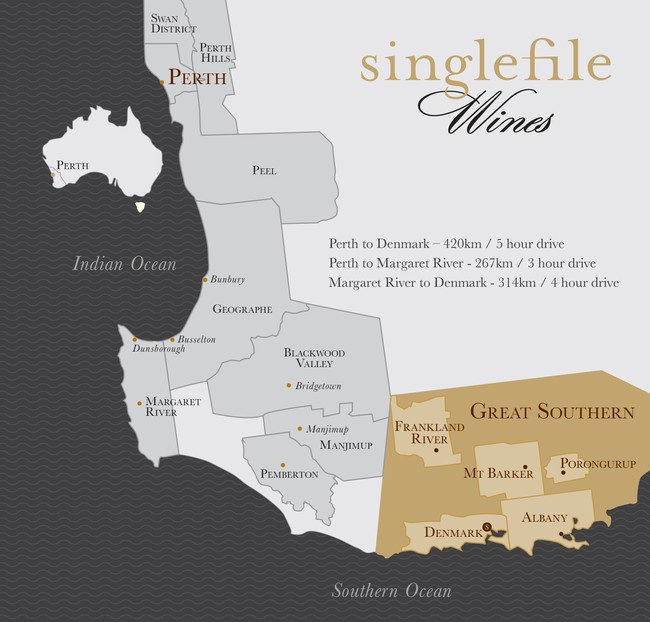 The beautiful Great Southern wine region straddles the southern coastline of Western Australia between the towns of Albany in the east and Walpole in the west and extends inland for about 150km to the north. For those lucky enough to live in the region or to enjoy nature-filled holidays here, the dominant features include beautiful beaches defined by inspiring granite outcrops and undulating topography within 50km of the Southern Ocean coastline. The landscape is covered with stands of magnificent Karri (the world’s third tallest tree) and Jarrah trees. To the north, beyond the 50km limit, the terrain is marked by a moderately elevated plateau revealing little by way of dissection.

So how did the Great Southern become the land it is today?

Allow us to take you on a geological journey of our region. Careful study of the topography of the Great Southern, and indeed the characteristics of soils distributed across the region, provides hints that reveal a story of two great geological events that have shaped the area.

The first is the evolution of the supercontinent of Gondwanaland of which much of Western Australia was part. And second is the break-up of Gondwanaland commencing ‘only’ about 150 million years ago. During the break-up, which effectively continues to this day, different ‘bits’ of the continent split away at different times and at different rates. Studies suggest the separation of Australia from Antarctica was complete about 30 million years ago and the incipient Great Southern Ocean was in existence, with the southern coastline of Australia being broadly defined, as we know it today.

Prior to the dismemberment of Gondwanaland, the supercontinent had evolved over a period of some three billion years. Needless to say, during this immense period of time (99% of geological time pre-dates the separation of Antarctica and Australia), the earth was, and remains, a dynamic entity. We know that the supercontinent of Gondwanaland was pushed and pulled across the earth’s surface – bits were pulled apart to form sedimentary basins and then pushed back together to form great fold mountain belts, which were subject to long periods of erosion and eventual planation (flattening).

The Great Southern region as we know it today encapsulates evidence and geological characteristics that reveal the nature and extent of processes that occurred. Much of Western Australia is built of Archaean rocks (rocks older than about 2500 million years), generally referred to as cratons. These are preserved remnants of the very oldest rocks that existed during the first one billion years of the earth’s history!

Geological studies of the continents that once constituted the supercontinent of Gondwanaland suggest about 1200 million years ago there occurred a great mountain building (or orogenic event) with the associated tectonism, volcanic activity, rock deformation and metamorphism. Much of the Great Southern region is underlain by the deeply eroded remnants (largely granitic in nature) of just such an east-west trending orogeny named the Albany-Fraser Orogen. Mapping in Antarctica has revealed the ‘other half’ or southern part of the Albany-Fraser Orogen is to be found along the northern coast of the southernmost continent. What is of interest is that, whether by coincidence or by nature’s design, the separation of Australia and Antarctica more or less coincided with the central part of this Orogen about one billion years after its evolution.

And now we come back to Singlefile’s home – it is the rocks of the Orogen that form the basement rocks of the Great Southern region today. Most of the basement terrain consists of granites of various types as evident in the granitic outcrops along the coastline.

Prior to the break-up of Gondwanaland, the landlocked terrain that was eventually to emerge as Australia was subjected to many scores, and possibly many hundred million years, of intense weathering. This resulted in the deep weathering of the upper part of the granitic basement to form various types of clays and over extensive areas the clay developed a surficial duricrust capping of ferricrete, an iron-enriched chemical sediment formed by the precipitation of iron oxides. Along the southwest coast of Western Australia, the deep weathering led to the formation of aluminium-enriched bauxite clays, while in the Great Southern region kaolin clays are common.

As the continents drifted apart, an array of new processes were initiated. Rivers started flowing southward into the new ocean with the associated erosion, since there existed a new base level. Continental drift involved crustal extension with associated faulting and the formation of fault-bounded mini basins in which vegetation materials accumulated – this ultimately led to the formation of coal deposits and oil and gas hydrocarbon reservoirs.

Many of these fault-bounded grabens that started life as lacustrine shoreline depressions were eventually inundated by the emerging Great Southern Ocean and now lie beneath the ocean floor. Structures of this type occur along the west coast of Western Australia and constitute some of the world’s huge gas reservoirs now being exploited where ocean depths permit access. Exploration for hydrocarbons offshore of the Great Southern region has been talked about but has yet to commence principally due to the considerable water depths and the resulting technological challenge that presents.

Along the emerging Great Southern Ocean coastal zone, the old pre-Gondwana erosion surface was dissected, leaving elevated hills capped with ferricrete (eventually to be mined for road gravel and building stone). In lower lying areas, erosion and lacustrine marine processes led to the deposition of concentrations of clay, silt and sand to form what we now refer to as the Karri loam soils interspersed with sand and gravel-enriched areas located in old river courses.

The Karri loam soils that formed proved to be extremely fertile and it was on these soils that the great forests of Karri grew. Great forests of Jarrah trees grew on the less fertile higher land underlain by ferricrete, clays and basement rocks.

Singlefile Wines’ vineyard is situated in the heart of the Scotsdale (River) Valley and is underlain by fertile Karri loam, which ranges in thickness between 0.5m and 1m. Below the loam is a thin pebble zone, which then passes into a substantial zone (several metres) of kaolinitic clay. Below the clay is basement granite.

How fortunate we are that Australia split from Antarctic when it did and that it now resides where it is. The end result is the magnificent Great Southern wine-growing region. The home of Singlefile.