All About the Frankland Region

Singlefile’s pursuit of excellence is supported by its commitment to the Great Southern region. If biggest is best, then this region wins the trophy. Australia’s largest wine region is home to five diverse subregions that yield premium fruit across a wide sweep of varieties – Riesling from Mount Barker and Porongurup; Chardonnay from Denmark and Cabernet Sauvignon from Frankland River.

Many of Singlefile’s red wines hail from the Great Southern’s Frankland River region – it’s Singlefile’s most prolific red grape-growing area. This fertile region is tucked up high in the northwest slice of the Great Southern region. This is productive farming land, bound by rolling hills and natural bushland coloured by native wildflowers. It’s the most northerly of the Great Southern sub-regions and the furthest inland, producing great climatic conditions for growing Shiraz, Riesling and Cabernet Sauvignon. Its altitude ranges between 200 and 300 metres.

So why Frankland – how did this subregion come to be christened with this moniker? In 1829, Dr Thomas Braidwood Wilson, a surgeon and self-professed explorer, was travelling from Albany in the west to Sydney in the east. His purpose was to discover more about the inner stretch of our wide brown land. His explorations revealed the interior of WA was prime fertile farming land, and settlers soon began to move there in the hope of cultivating their fortune. In his travels, Dr Wilson named Frankland River and Mount Frankland after George Frankland, Surveyor-General of Van Diemen’s Land at the time. 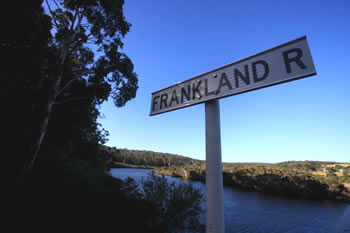 The Geography of Frankland River

Frankland River’s highly productive, fine, well-drained gravelly marri loam soils are derived from granite or gneiss outcrops, typically rich, red in colour and uniform in depth. A moderately elevated plateau marks the terrain. Before modern-day development, grand Jarrah trees grew on the less fertile higher land that was underlain by ferricrete, a thin layer of ironstone-based gravel caused by weathering of the soil, clays and basement rocks. Wines produced in Frankland River display flavour that is derived from these ironstone-based gravel soils that line the river valleys and rolling hills.

The climate is cool and continental, with dominant winter and spring rainfall. The cool nights and warm days brightened by lengthy sunlight hours provide a true Mediterranean climate boosting the wines with fruit intensity, finesse, freshness and longevity. Despite Frankland River’s distance from the coast, the typography of the land encourages a lovely sea breeze from the Southern Ocean, which finds its way inland and cools the late afternoon temperature creating a long, slow ripening season.

It is thought that the first official observation of Frankland River’s farming potential was made by the botanist Baron Von Mueller on one of his journeys to the area in the 1860s. Fast forward 100+ years and Dr Harold Olmo, pioneering viticulturist and professor at the University of California, was next to note the potential of the area.

In his report published a year later, the commentary highlighted the “great promise” of the Great Southern area, in particular Mount Barker and Frankland, of crafting table wines in the “light, traditional European style”. He also noted that the climate of the Great Southern mirrored the climate of France’s Bordeaux region, with cool summers that offer fine ripening conditions for vines and their berries.

This recommendation was further acknowledged by viticultural scientist Dr John Gladstones in 1963, and was endorsed by the Western Australian Grape Industry Committee in 1964.

Entrepreneurial farmers acted upon these positive reports, and the Roche family of Perth made the first plantings in 1967, followed by other small family-owned vineyards. Interest in the area has proliferated since then, and today the region boasts more than 1600 hectares of vineyard plantings, marking it as one of the state’s largest winemaking subregions.

Frankland River has flourished as one of Australia’s highest-yielding premium suppliers of fruit to wineries based in the Great Southern, including Singlefile, and all over the country. Frankland River is a healthy place for vine growth, being almost completely free of pests and disease, and a good distance from industrial production and pollution that comes from urban development.

Frankland River is a year-round destination boasting wineries and cellar doors, spring wild flowers, olive groves and natural attractions for visitors to enjoy. Its natural attractions include Lake Poorrarecup and Lake Nunijup, which are popular for swimming and skiing. And the Frankland Heritage Trail provides a fascinating insight into the area’s local history. A walk along the Frankland River looking for the rare and unique wildflowers is an enjoyable way to enjoy warm days.